You may remember when, back in August, I posted about an interesting cabinet which was going for auction at Christie's in London. I wrote about it:

" I would love to have this cabinet. It would look great in my kitchen holding my favourite china, or in the bedroom full of linen. Or even better: it could go in my work room, holding all of my materials for miniature making. Of course it could become a 12th scale dolls house, I think the measurements would be just right for that!"

Unfortunately the cabinet was too expensive for me and even if I had been able to buy it, getting it from England to Holland would have been a major undertaking.

Fast forward a few months, it is now December 2010 and I get an email from Madelva, the editor of the Spanish miniatures magazine 'Miniaturas'. Madelva had seen my post about the cabinet and cooked up a little surprise for me... She had contacted Christie's and with their permission, published the building plans for the cabinet in 12th scale! (Miniaturas año 16, No 155) 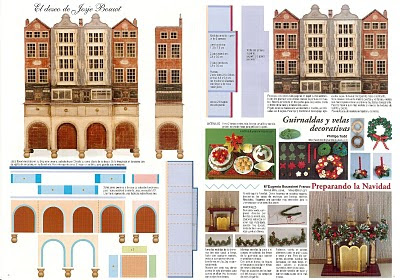 Such a wonderful surprise, thank you Madelva! I will certainly build my own cabinet now.
Labels: dolls house Publications