The Queen, the Duke and His Master's Voice...

London...one of my favourite cities in the world. I was able to go there last week and spend several days enjoying art and miniatures. It was wonderful.

After a post by Linda (Une Petite Folie)a few weeks ago, I was reminded to go and visit Windsor Castle and see Queen Mary's Dolls' House.
The Dolls'House is huge but beautifully made. I love the fact that so many companies and artists contributed pieces to fill the house. It is a shame that it is difficult to see all the detail as you - understandably- can't get very close to the rooms. However, the two books about the dolls' house (on sale in their bookshop and on Amazon) and the website about The Queen's Dolls' House are very good and have detailed photos.

Unfortunately it is not allowed to take photos of the dolls house, so instead, here are two photos I took at Windsor Castle. 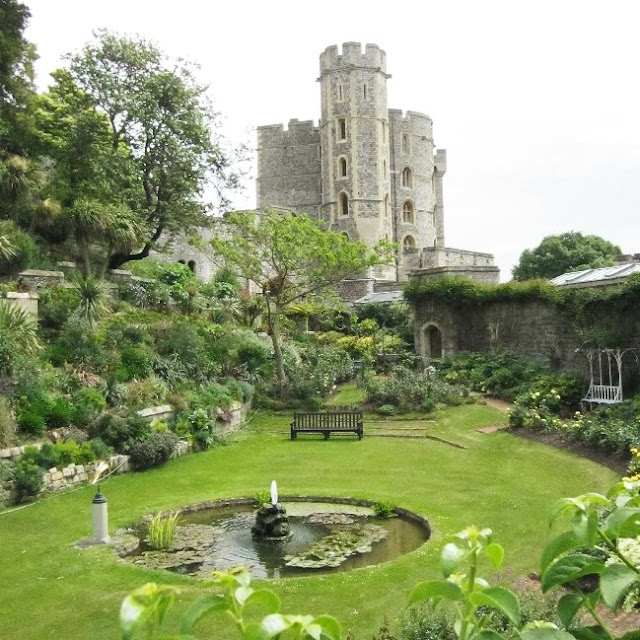 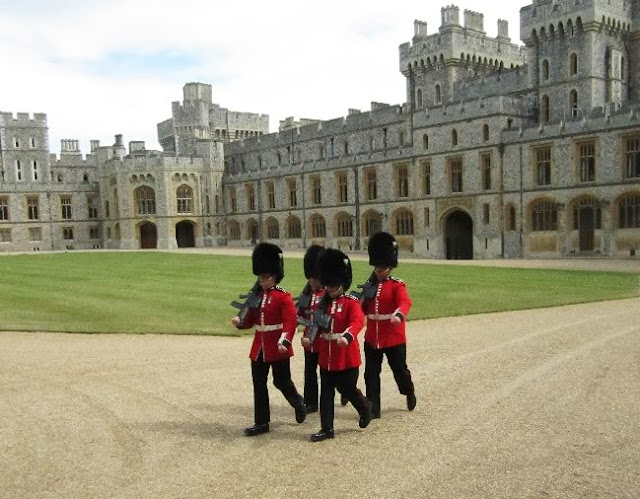 We spent two full days at the fabulous Victoria & Albert Museum, looking at some of their jaw-dropping collection. In their silver section I was able to name and date several full sized silver pieces, not because I am an expert on silver, but because I own some of them in miniature, made by Jens Torp. I thought that was so funny, collecting miniatures can be very educational!

Here is a rare photo of me, reflected in a late 17th century toilet service mirror. 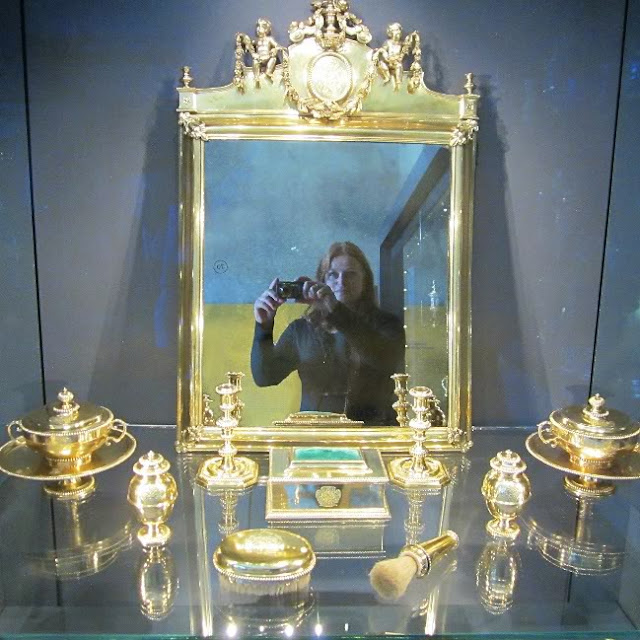 During the weekend I spent a fabulous two days at the Kensington Dolls House Festival. I planned to take lots of photos (I even bought a handy little camera so I didn't have to carry my bulky and heavy DSLR camera with me), but I forgot all about it! I promise to take some pictures of my purchases soon though, and give you a little show report that way.

On the last day of our trip we went to Chiswick Auctions. When we arrived we saw a notice on the door that filming was in progress for the ITV show Dickinson's Real Deal. We don't get ITV in Holland, so I don't know this particular antiques show, but I do remember David 'The Duke' Dickinson from when he presented BBC's Bargain Hunt.

When the auction started they were still filming, so even though I won't be able to see it myself, all of you ITV viewers out there may be able to catch a glimpse of me in one of these 'Real Deal' shows! (If only I had known they'd be filming me, I would have put on a nice frock and some make-up, haha!) 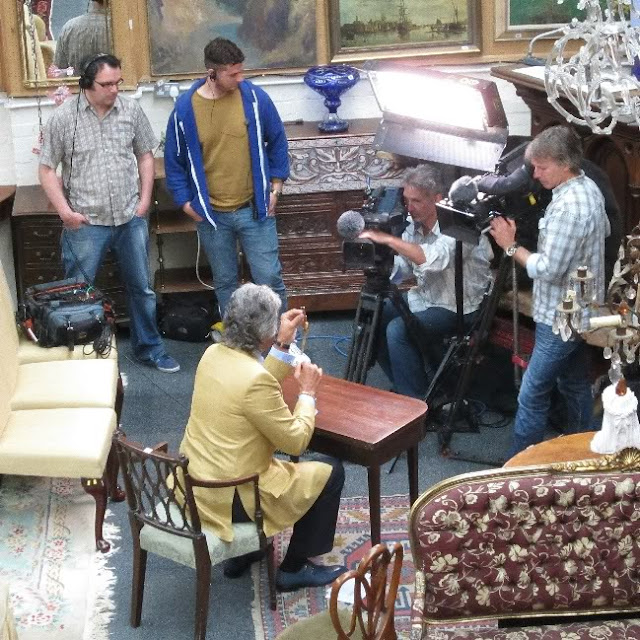 During the viewing at the auction house I spotted a lot of around 20 glass topped boxes from the 1920's, some of which contained miniatures. The estimate was within my budget, so I decided to bid for it. When my lot came up, the bidding was fast and over before I knew it, but I got the lot! It was very exciting.

These are a few of the miniature items which were in the lot: 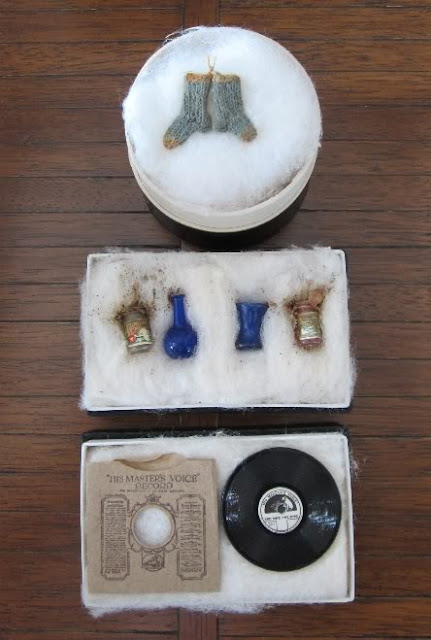 These two boxes are my favourites. Although the items in the second box look a bit tatty, it is not as bad as it looks. The two items on the outside are actually jars of marmalade and strawberry jam, the same ones can be found in Queen Mary's Dolls' House! The paper tops have started to disintegrate, but the rest is in reasonable condition. 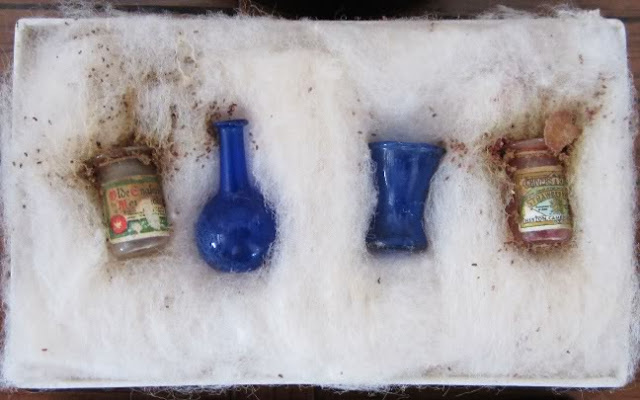 And lastly: a real record from 'His Master's Voice' in miniature, with a recording of 'God Save The King'. A copy of this record can also be found in The Queen's Doll's House.
Isn't that just the most perfect souvenir from a miniature filled week's visit to London? I absolutely love it. 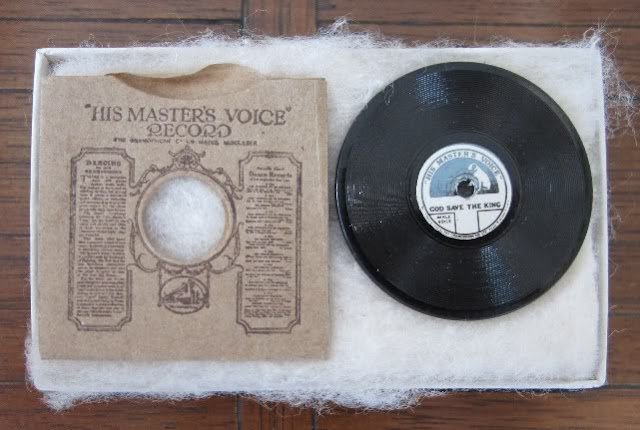