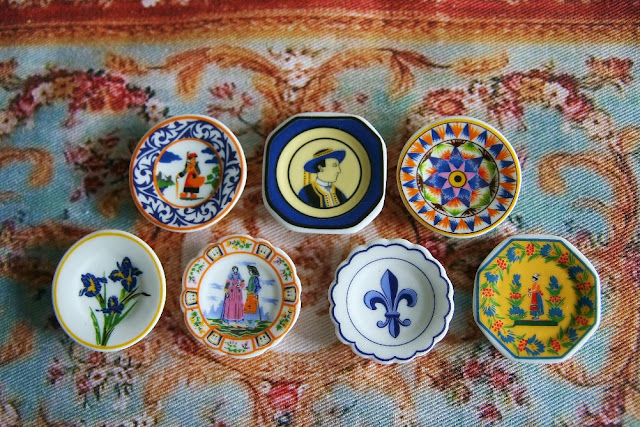 These are the seven other Quimper plates which were in the set I bought.  I bought them at 'Art de Cornouaille' (http://adc-quimper.fr/5/Accueil.html).  They were  € 20 for a set of ten.  I believe they were made as 'feves des rois' (to be baked in a cake). Although not handpainted, they are real porcelain.  I saw two sets when I was there, 2009 and 2010, mine are from the 2010 set I believe.

I found more sets on the internet, also quite nice I think:  http://www.feves-collection.com/feves-assiettines/241-assiettes-personnages-de-bretagne.html   and http://www.feves-collection.com/feves-assiettines/239-assiettes-de-quimper.html   (and many, many more to be found in the sidebar).  Unfortunately they seem to be out of stock at the moment.
Labels: kitchen miscellaneous miniatures Porcelain