Ozzie goes down under...

For those of you who watch the BBC's Antiques Road Show, remember Ozzie the Owl?   Ozzie is a 17th century Staffordshire slipware jug and cover which came to the Road Show back in 1990.  The ceramics expert Henry Sandon was lost for words when he saw the rare piece of pottery, which he then valued at between 20,000 and 30,000 pounds.

I never forgot that piece of pottery which was slightly odd and you might even say a bit ugly, but oh so charming!  Then last month I was at the show in Apeldoorn, visiting Karon Cunningham's stall, and what do I find?  A miniature Ozzie the Owl slipware jug and cover!  Of course I could not resist buying it.

The miniature version was made by Duncan White.  The body of the owl is the jug, while the head lifts off and can be used as a (tiny) drinking cup.   Little Ozzie is not very photogenic but só very cute! 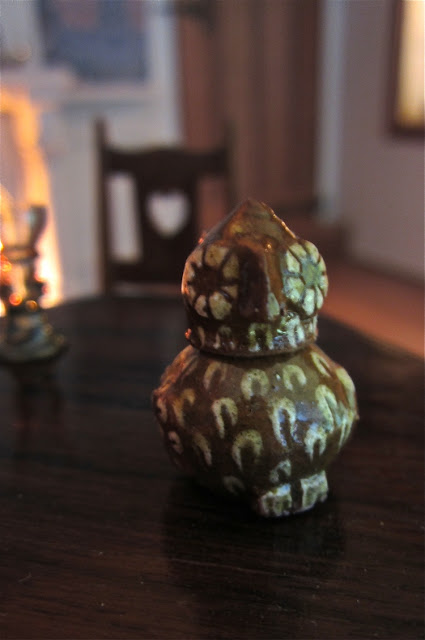 It will live in my Arts & Crafts inspired room in the basement of my first Canal House.  I am making slow progress on this room, but I have found some great pieces to furnish it.  A few months ago I bought these Voysey dining chairs, made by Kim Selwood.  The Godwin table and Morris chair in the background were also made by Kim Selwood,  I bought those a couple of years ago at the Kensington show. 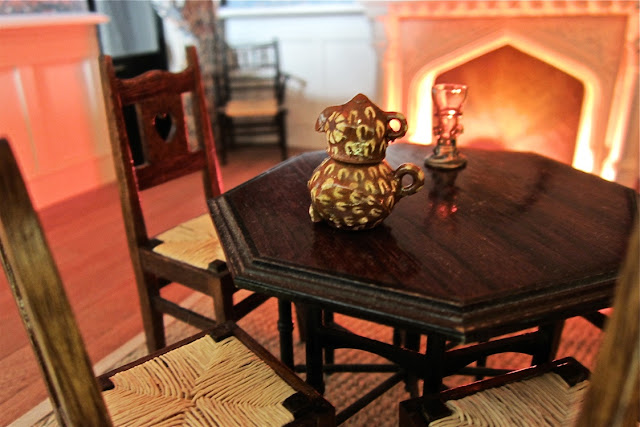 The Voysey carver chair (also by Kim Selwood) matches the dining chairs.   I love the design with the little heart shape cut out of the back.

At Louise Meertens stall in Apeldoorn I found another slipware jug.    Unfortunately Louise was unable to tell me who the maker of this one was.   I just thought it was funny I found two slipware pieces I liked on two different stalls. 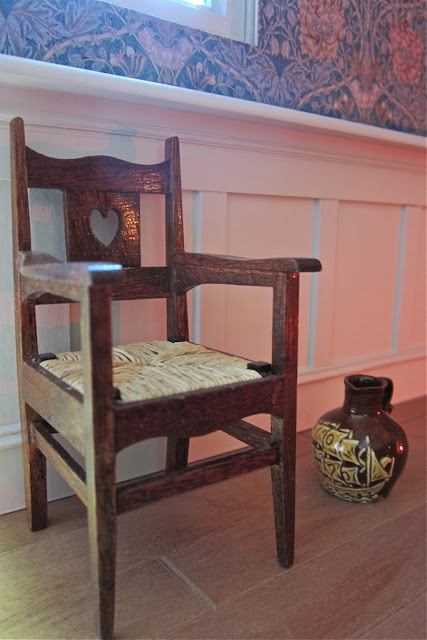 I thought I was going to need your help in establishing the maker of this jug, but after examining the marks underneath both pieces I concluded that they are by the same maker, Duncan White. 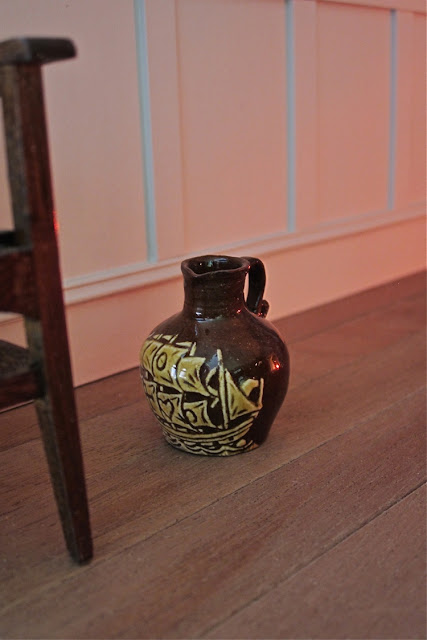 Who knows, this weekend I may be able to find some more slipware pottery pieces as am I heading out to London tomorrow.   I will be visiting the Kensington Dollshouse Festival!  Anyone else going?  Maybe we can meet in person there!