Last month Bill Robertson came to the Netherlands to teach his ' Bone & Iron Chest'  class, which I was lucky enough to be able to attend.
The class took place at the home of Trees Beertema.  Trees has a beautiful workshop/classroom available and is a wonderful hostess,  which makes taking classes at her place always feel like taking a short vacation, even though you have to work really hard! 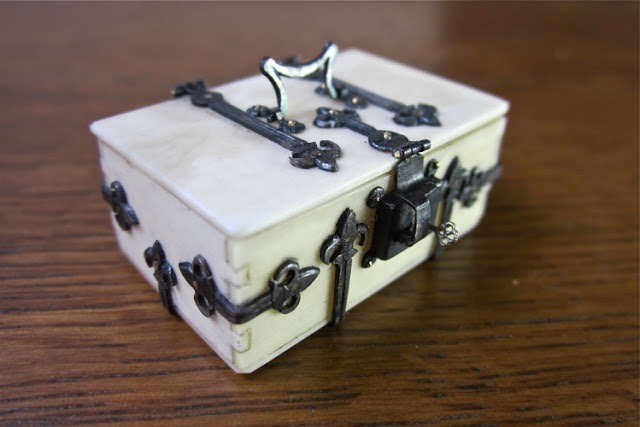 This is my finished chest.  I am quite pleased with it even if it has a few faults.  Making the working lock was the biggest challenge, but I managed and it works!
Below are some of the few photos I took during the class.  You may want to look at Elga's and Debora's blogs, as they also took the class and have posted about it. 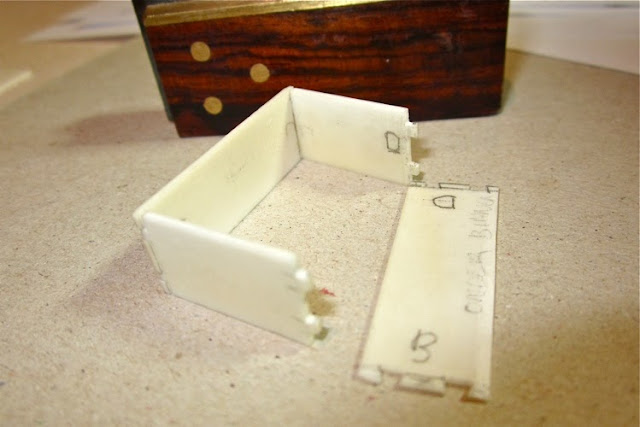 We started out with cow bones which we cut up (and Bill had prepared some for us to save time) and then made those into a lovely dovetailed box.  My first ever dovetails!  Such fun! (no really, I mean it!) 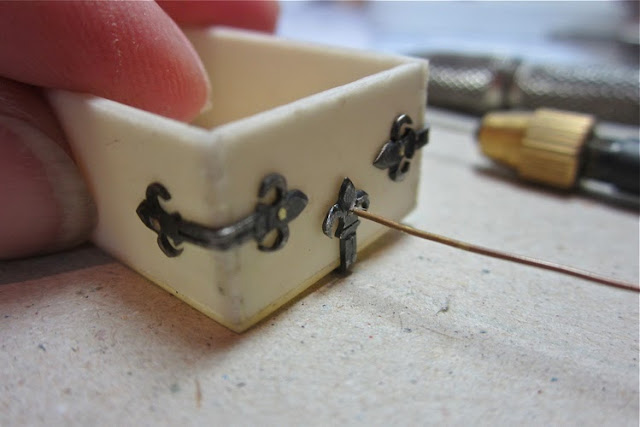 We cut the hinges and straps out of thin steel, made them look pretty ( well that's debatable, considering crooked lines I managed to carve into the steel... ) and riveted them onto the bone chest.
So, after four days (and a few nights lasting well into the early hours!) we still were not finished, but we got some clear instructions on how to finish the chest and the lock. 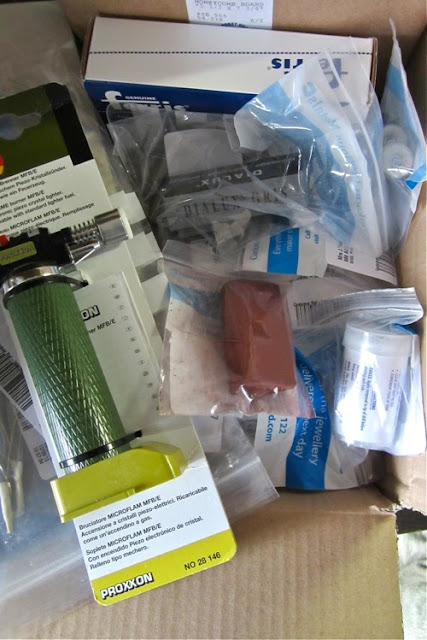 Even though Bill tries to teach his classes using fairly basic and 'normal'  tools, in order for me to finish the chest at home it meant I had to go online and buy lots of  'stuff',  as I just do not own a lot of the tools we used.
I spent a full day trying to source materials and tools and managed to find nearly everything I needed from two shops:  Cookson Gold in England and De Zilverwinkel in the Netherlands.   Both stores got my order delivered to me within 24 hours.  Fantastic! 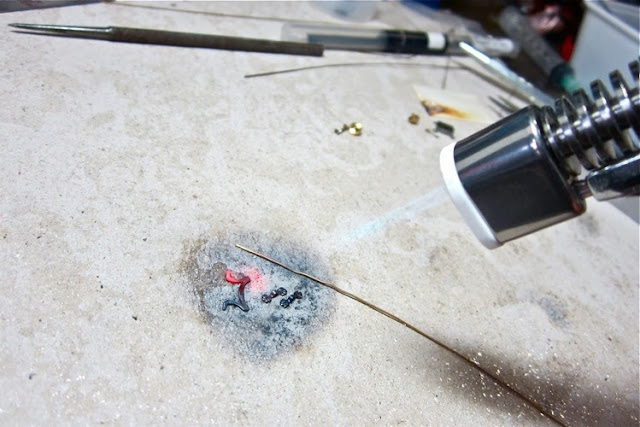 It was a bit like St.Nicholas or Christmas unwrapping all of my new toys.  And I've had so much fun playing with them!  The best toy is my torch which I needed to anneal the steel and to do some silver soldering (see also Elga's post). 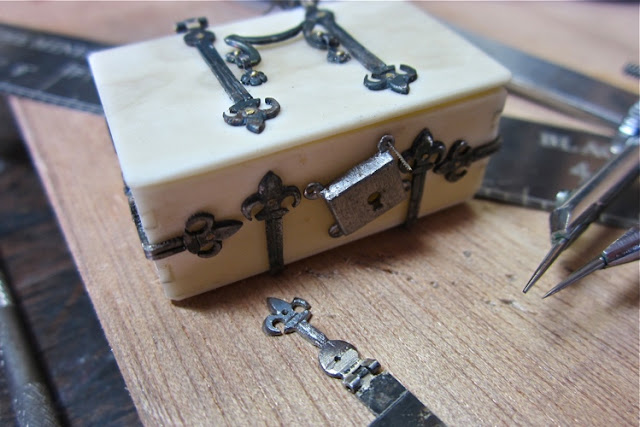 After cutting and fitting the handle it was time to start on the most challenging part of the chest:  the working lock.   It took a lot of fitting, measuring, dry fitting and trying again to make it all happen.  The part with the hinge at the very bottom of the picture above gave me the most trouble.

In trying to bend it to go around the lock, it stuck out a bit too far.  I was afraid it would break if I bent it back and as it is a part with a hinge on it (I did not have a hinge plate left to cut another one!!) I tried to hammer it down a little.  All that did was make the metal dangerously thin.

As I had just bought a torch and silver solder, I decided to try and do a little repair job even though the hinge wasn't broken yet.  Of course I did play around with the silver solder and some scrap metal first and that all went well so I went ahead and soldered my 'nearly break'.  It worked!

So even though it sticks out a bit, I managed to finish the lock hinge without breaking it.

All in all, I am very pleased with it.  I have started to age the chest a bit (rounded the edges and corners and used a dark wax on it) but I think it could do with some more ageing.  I may try burying it in the garden for a while, who knows how great it will look then! 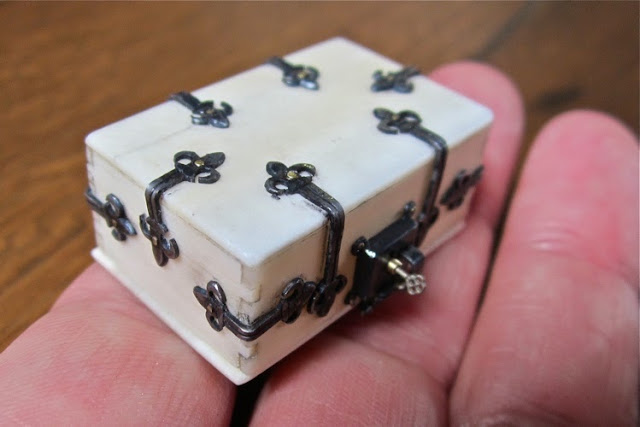 This is the bottom of the chest, so pretty with all the straps going over the edges.   I can see some of the wax still needs to be wiped off.

As I am a slow worker by nature, one of my objectives in class is just to try and keep up with the rest of the students. It doesn't matter that I'll made a few mistakes or that not everything is as neat as it could have been.  It is about going through the process, understanding what is going on and learning how I can do something on my own at home.

I have learned so much from this class.  So many techniques I can use on future projects.   And I came away with another new challenge:  learning how to silver solder.  Now that is something which takes a lot of practice but that opens up so many new possibilities! 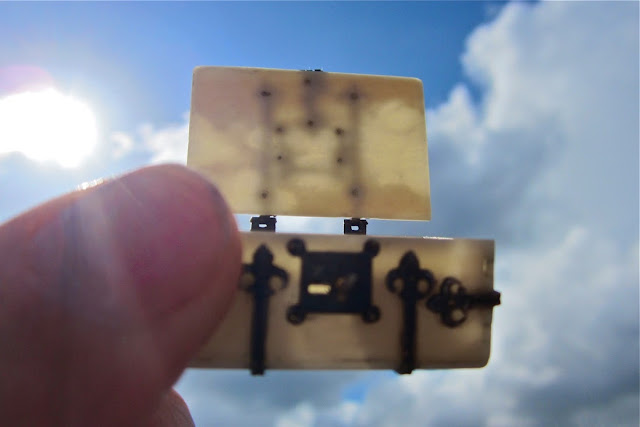 I will leave you today with this photo.  I wanted to show you the lovely natural pattern on the bone which I chose to use for the lid.  As it is best seen when you hold it up to the light, I went outside to photograph it with the sun behind it.  I couldn't really see what I was photographing as the light was too strong, so I just held up the chest, closed my eyes and snapped a picture....

Do you see it?  The clouds, the bone pattern.... It looks like the clouds are floating across the lid.  Totally accidental, but sooo pretty!
Labels: classes tools workshops