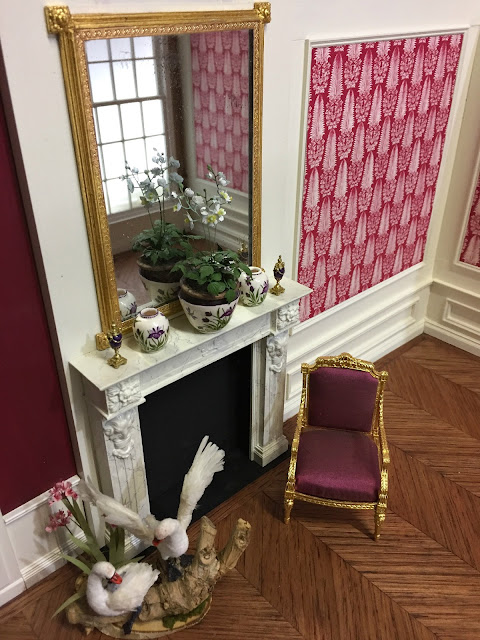 With some of the Dutch summer weather colder than last Christmas, I spent several days indoors working on a new room for my Herengracht canal house.  All of the rooms are separate roomboxes which will eventually form the dolls house when they're all put together.

The new room will be a bedroom situated at the front of the house, above the front door and the Blue Room.  The room has three sliding windows and after cutting the floor, ceiling and walls of the room,   I spent several days making these windows. 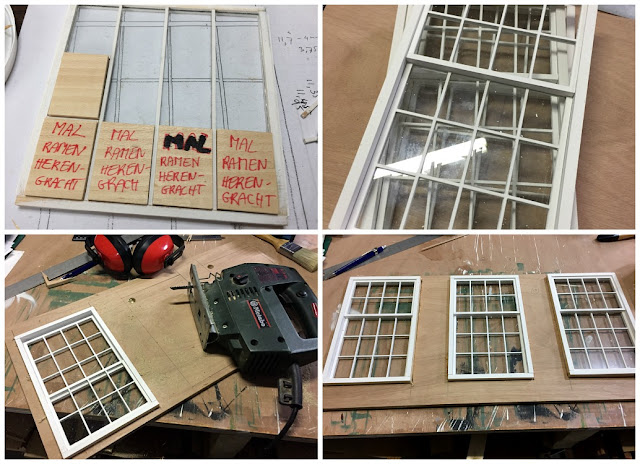 And of course the sliding windows work.  Not a difficult element, but I just like it.  The original sash windows in canal houses would probably have a pulley system, but in miniature that would take up too much room inside the frame.


When starting on the decor of a room I like to make the fireplace first.  For this room I decided to work in a Louis XVI style again.  That is to say I use elements of the Louis XVI style but other than that I just do as I please.

The decorative elements come from various sources: the corner flowers are from Sue Cook, the leaf detail from E. Elsner v. Gronow and the ram's heads come from an old little casket which belonged to my grandfather.  I marbled the fireplace in light grey colors and gilded the mirror with real gold leaf. 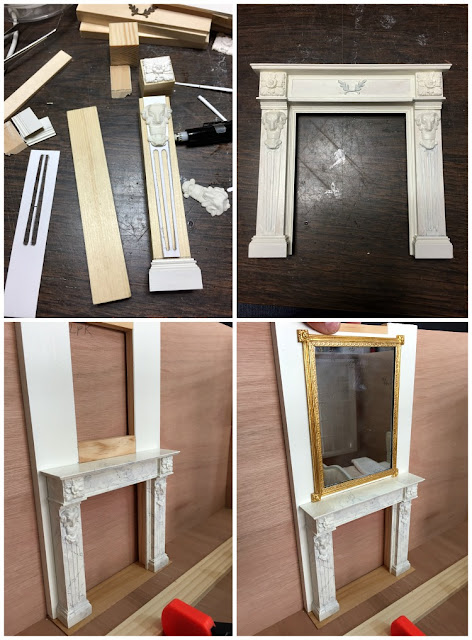 For the floor I bought several lengths of oak veneer, about 1 mm thick.  I cut the veneer to size with my new table saw and wow! let me tell you how much easier and more precise this saw cuts compared to my old one.  Quite an investment but so worth it! 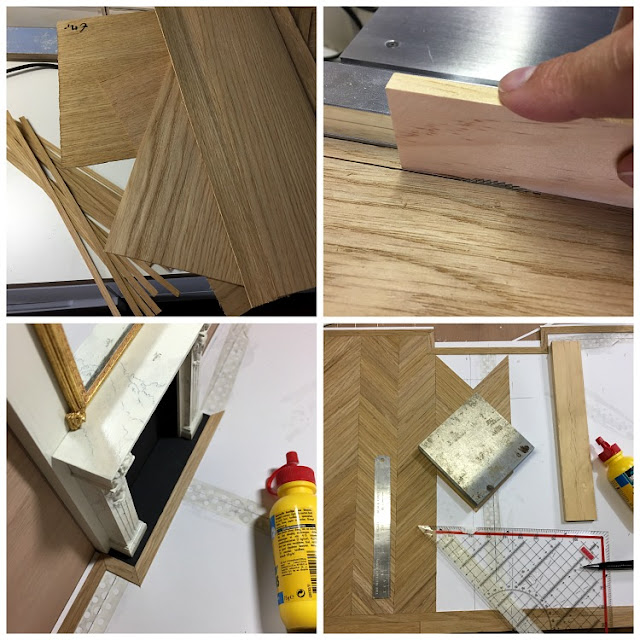 The pattern of the parquet floor is 'Point de Hongrie' (Hungarian point or Chevron).  For this pattern oak was often used.  I glue my flooring pieces onto a paper template which I have made to fit the room before I start laying the floor.  Even though the pattern looks simple enough, it took quite some time to finish it. 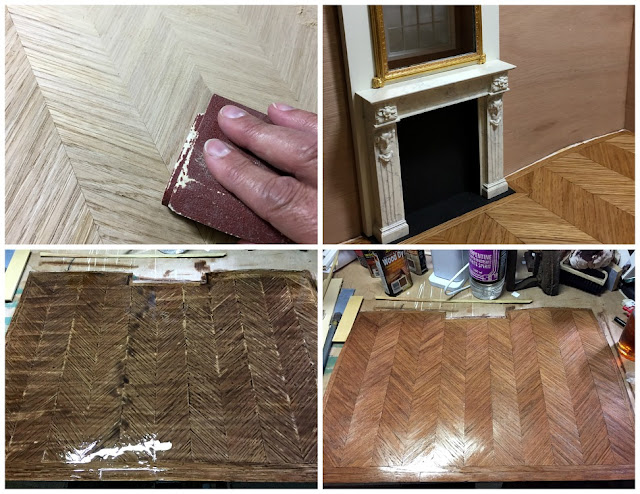 And then I thought, a little sanding, sealing and finished.  Wrong!  The photo top right was how the floor looked when I thought it was finished, but the colour was just a bit too blond, too modern.

Unfortunately it was very difficult to get the sealer off or to get any kind of stain on.  And believe me, I have tried and tried and tried.  In the end I managed to get it slightly darker and warmer, although it is a bit too pink in places.  At this moment (a few weeks later) the colour is better, less pink. 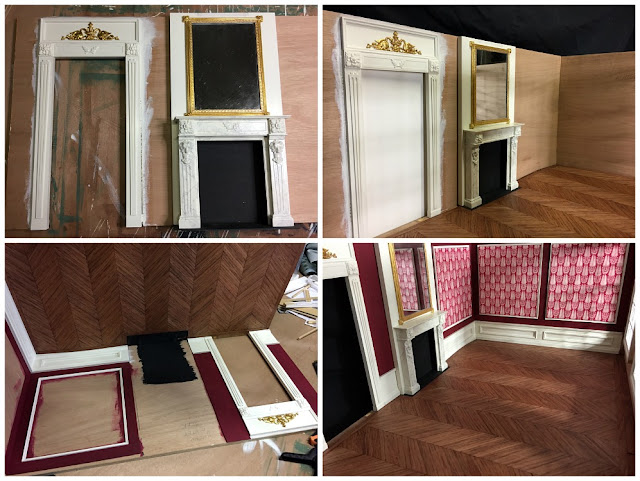 The next step was to make the door frame and the wall panelling.  The white lower panelling is the same as the panelling I made for the Yellow and Blue Salon.  Above that I made big panels to hold the wallpaper I bought from At Home with Mrs. Hogarth.

I thought it would great with the darker colour red around it so I carefully mixed paint colors until I had the perfect match.  The colour looked beautiful against the ivory paint, but once I put the wallpaper panels up, I hated it.  Far too loud and busy.  So, out came the ivory paint again. 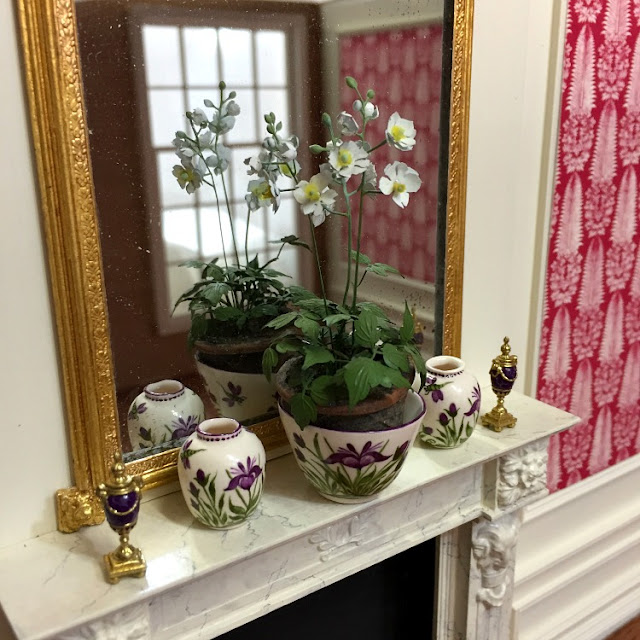 Much better.  The bowl and vase set (Cocky Wildschut) and the candle holders (David Iriarte) were bought by me several years ago, specifically for this bedroom.  The colour scheme I had in mind for this room has not changed much so these pieces will go in the room. 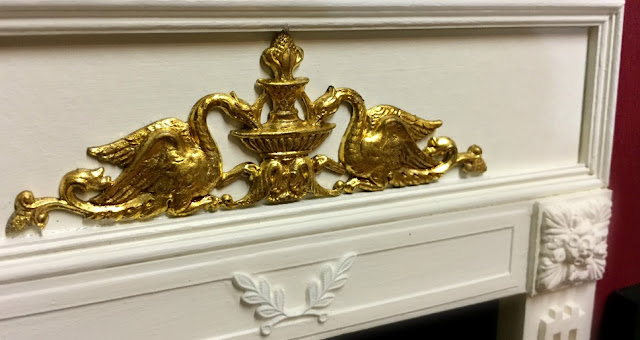 The top of the door frame is decorated with gilded swans (maybe they're not swans but some mythological animal, but to me they're swans).  The swans are a fitting symbol in the bedroom as swans are associated with fidelity, loyalty in marriage and monogamy.  The gilded swans are joined by this sweet swan family.  The swan family was made by Akke Ris. 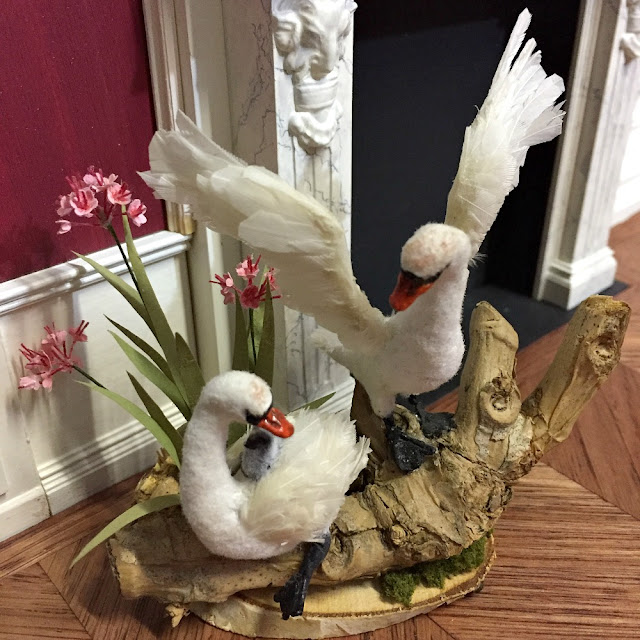 That's it for now.  I have started on curtains for the bed and windows, but again I am not entirely happy with the colors.  To be continued...
Labels: Bedroom floors Herengracht Red Bedroom