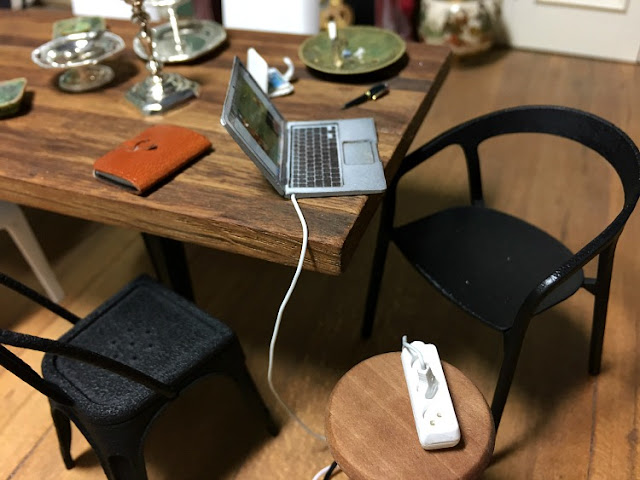 For practically all of 2017 I have been struggling with the choice of dining table for the Dining Room of the Herengracht Canal House.  The room has a rococo style with chinoiserie influences.
The period correct tables and chairs I tried in there were too 'twee' for my taste, making the room look a bit ordinary and uninteresting.

A circa 1800 oak cabinet, lovely but sadly broken beyond repair, gave me a supply of oak boards with a rather wonderful patina.  I wanted to use the wood for a dining room table, I quite liked the idea that the age of the wood would correspond with the style period of the table.  More or less anyway.

Instead of a period correct table, I decided to make a modern table using thick rustic boards, keeping most of the patina and some imperfections of the wood.  I even used a bit of wood with nail holes (from the handmade square nails which were used in the construction of the cabinet).

Construction of the table was very simple, cut boards glued and clamped together.  The table legs are a wonderful 3D printed table frame, based on the Tolix design by Pauchard.  I had to do a bit of routing to fit the frame to the table at the right height. 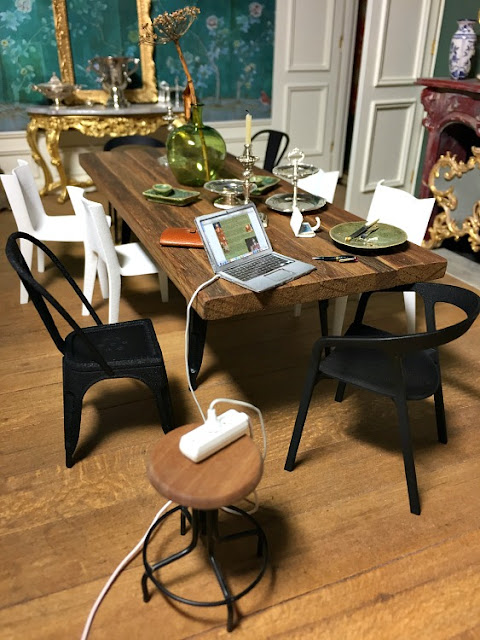 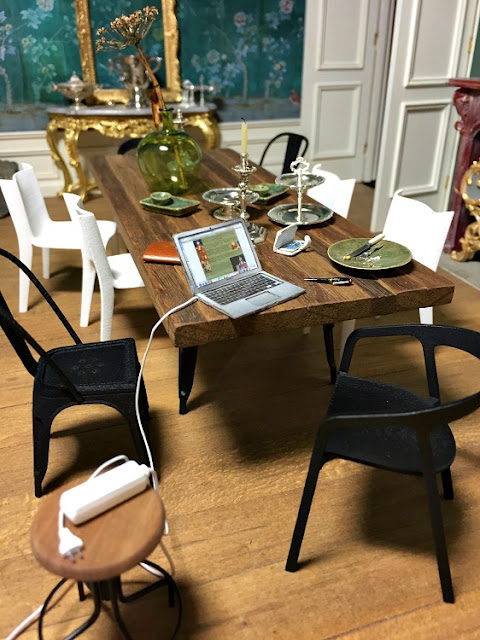 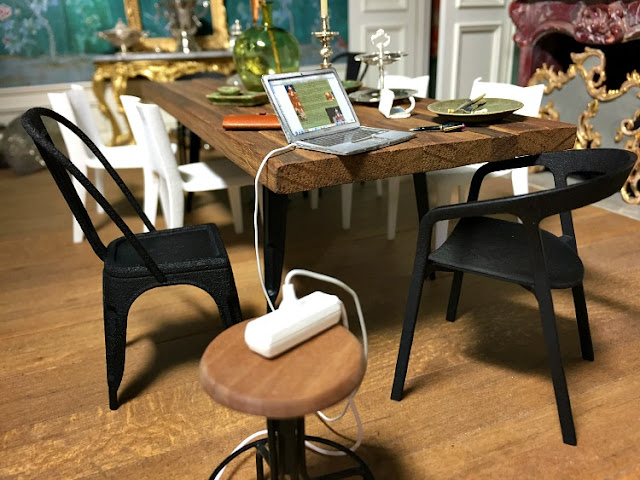 The MacBook Air and iPhone were made by me from prints from the internet.  I had some fun playing with mat and shiny surfaces and creating some depth by using layers but honestly, it's not looking hugely impressive up close. 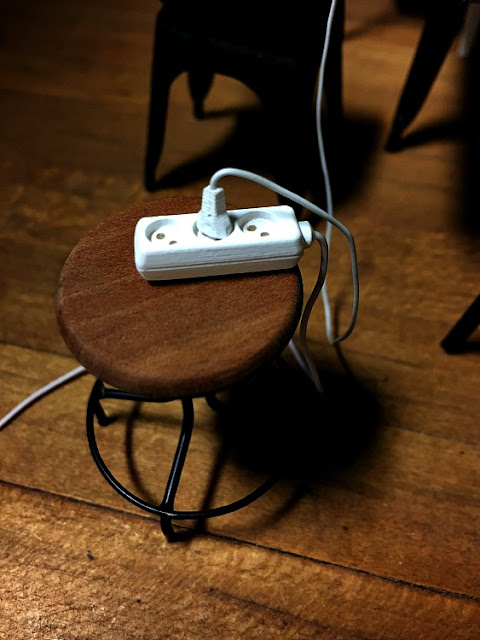 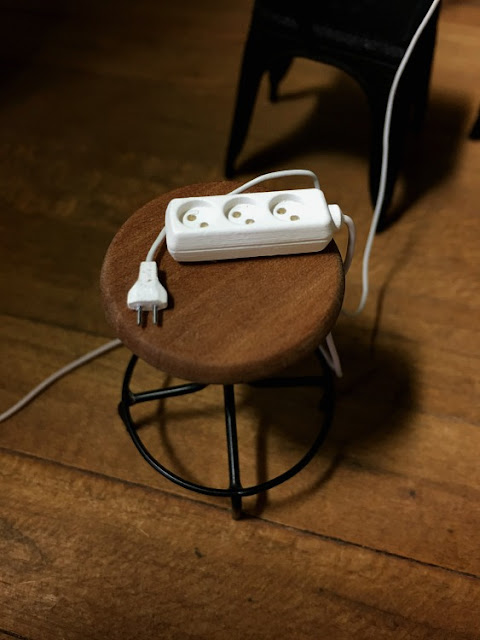 What I do absolutely love is the extension cord and the power plug.  The plastic parts are also 3D printed.  Yes I have been on a bit of a shopping spree ;-)   The cord and metal pins you have to add yourself, as well as finish the plastic by cutting, sanding and spray painting.   I also drilled holes so I could put the plug in. 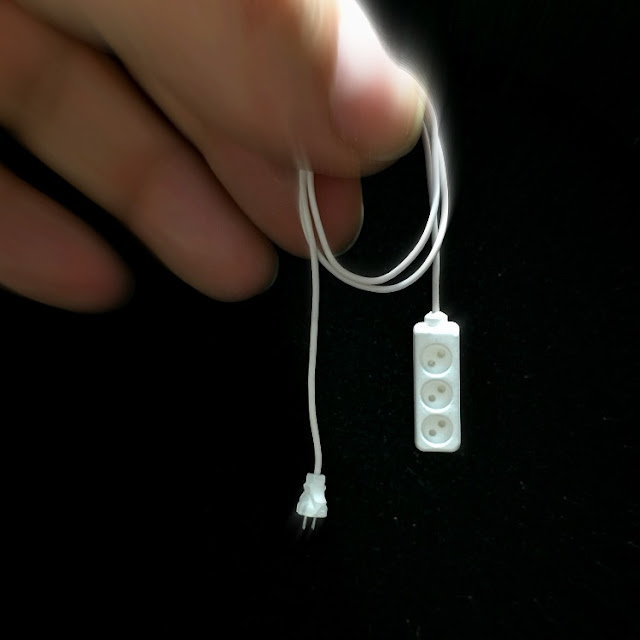 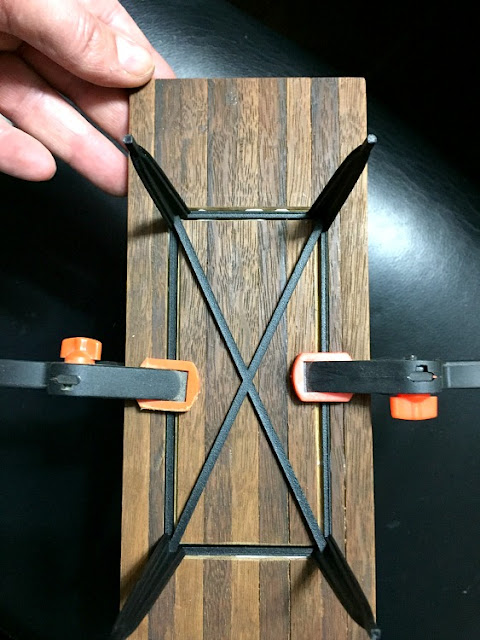 So, lots of 'New' besides the 'Old'.  It does make sense in this house, where another modern element, a sectional sofa, can be found in the Blue Salon as well.

New for me but actually quite old is a silver miniature trofee Saint Nicholas surprised me with.
The silver marks on it say it is sterling .925  Birmingham 1926, made by Crisford & Norris.
The inscription says:  Miniature Calder Cup, won by A.D. Loch 1937.

I don't know much about the Calder Cup, other than that it is the professional ice hockey playoff trophy of the American Hockey League and it has been annually presented since the 1936–37 season. The Calder Cup was first presented in 1937,  the same year as the inscription on my cup.

I tried to find out online who A.D. Loch was, and why he/she won this miniature cup.  I thought it might have been given to each of the players of the winning team, as a keepsake, but again I couldn't find anything about that online.  Maybe I should email the American Hockey League, maybe they know something about it.

Maybe there was another reason for the inscription, a joke among friends, a trofee for the most loyal hockey fan, a trofee for a young player....who knows.  Any ideas from you are appreciated!
But it will look  fab on my side table with a bottle of champagne in it. 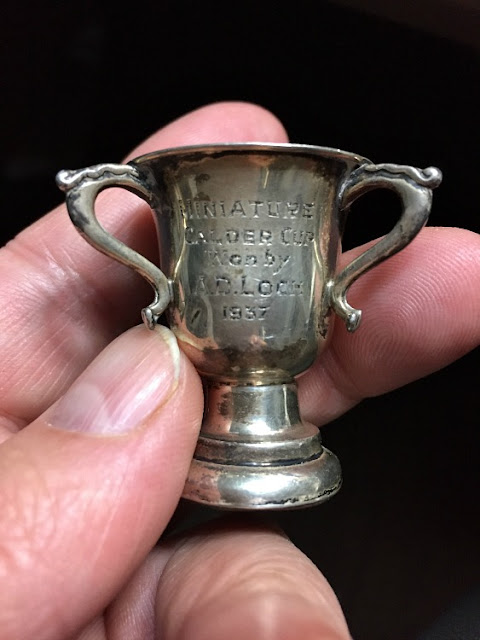 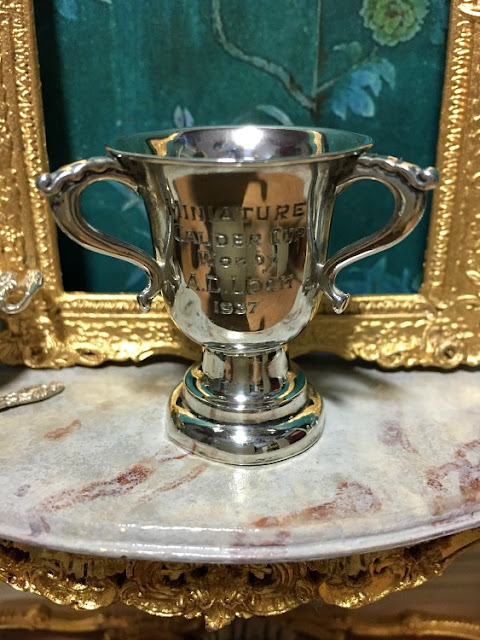 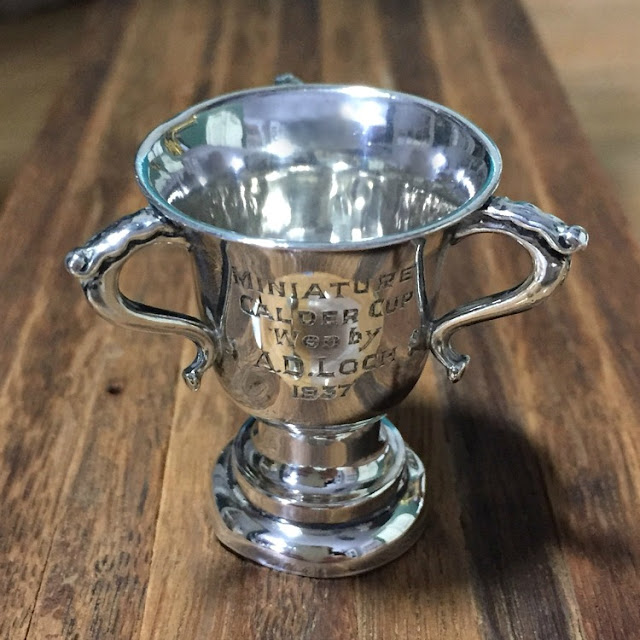