Due to a little incident involving a horse, myself, gravity and mother earth, I recently have had quite a bit of time to go over my photo files, check out Pinterest etc.  I also found a couple of blog posts in my drafts folder.  Posts I had started to write but never finished.  Here is one such post, now finished! 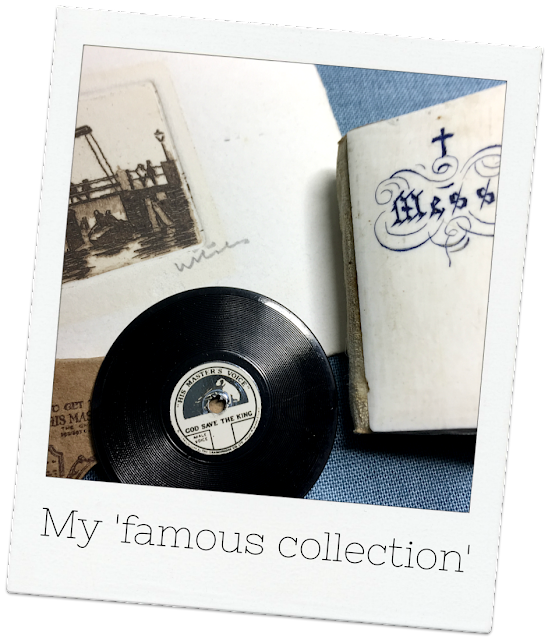 In my collection of miniatures I have acquired several old pieces which, unknowingly to me at the time of their purchase, could also be found in some very famous dolls' houses.   No major pieces, but such fun to discover them in these fantastic houses.

You may remember my post from several years ago when I went to Denmark and went to see Titania's Palace.  A little book in the chapel of the Palace drew my attention...I have the same little book!  Mine is a bit more worn, the velvet on the spine has almost worn away and the ivory cover is a bit chipped.  But it is the same little book.  I found mine a few years ago at an antique market in France. 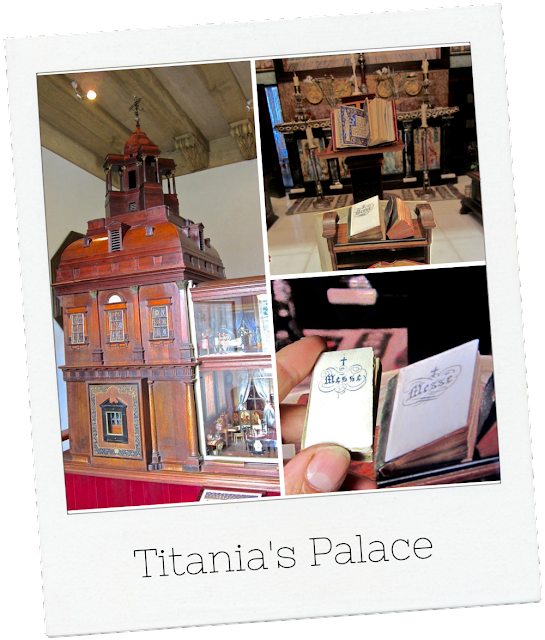 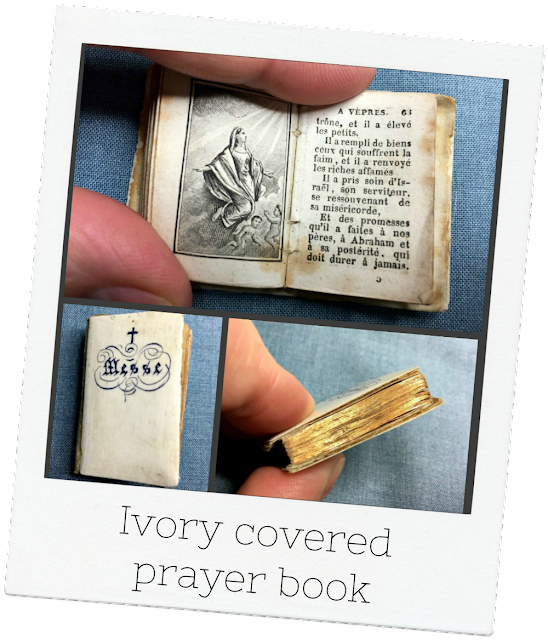 The little book with the ivory cover is a well used French prayer book: 'Petit Paroissien', which translates as Little Parishioner. It has several lovely illustrations and the pages are gilt-edged.
The book is very likely 19th century (one source says it is 1839, but I think it is more third/fourth quarter of the 19th century).

Published/printed by 'Paris, Marcilly, Rue St.Jacques, 10' and 'Typ. de Firmin Didot fr. rue Jacob 56'.
Firmin Didot was a famous designer of type fonts for the Didot family printing shop. The Didot type font is regarded as one of the first modern type fonts. 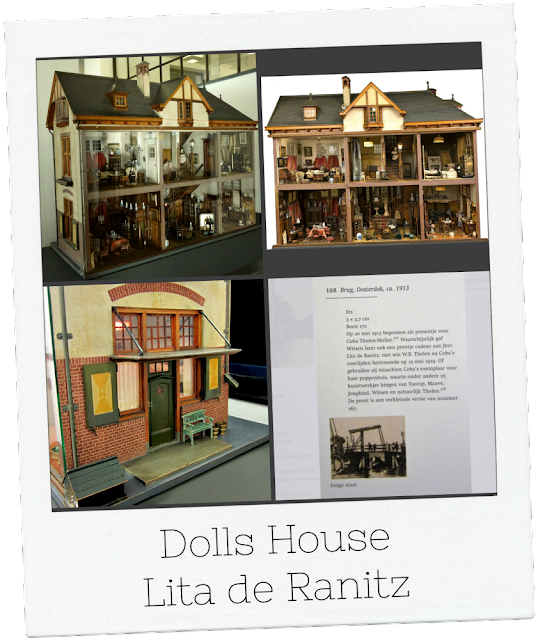 My next famous miniature is a miniature etching by Dutch artist Willem Witsen (1860-1923). Its twin hangs in the Dutch dolls' house which belonged to Dame (or Lady) Lita de Ranitz (1876-1960).  The large dolls' house is a modern villa in the style which was popular around 1910.

Lita de Ranitz was married to well known Dutch artist Willem Tholen and through him met many contemporary artists. Tholen himself and many of his friends made miniature art for Lita's dolls' house. Amongst the works of art is Witsen's etching of a draw bridge (ca. 1913), signed 'Witsen' in pencil on the bottom right. The etching hangs in the bedroom, the room upstairs on the right. 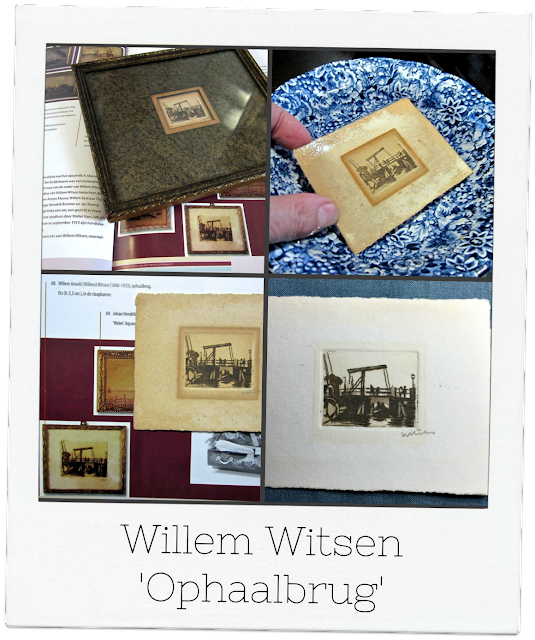 I was given the miniature etching as a St. Nicholas gift.  It came in an old frame which was far too big for the dolls house and it was rather discoloured.  After removing the ugly frame I found the etching stuck to the matting with tape.

Under expert supervision I proceeded to soak the etching in lukewarm water to remove the tape. The tape came off within a minute. The water won't affect the printing ink, the signature (written in pencil) or the paper.  After drying it was in pretty good condition considering it is 100 years old. It had some discolouration but that was to be expected. The next step was to bleach the print.  I was so pleased it came out beautifully clean and crisp!

Now here is my dilemma... the paper has not been cut since it was printed, so it still has the original edge from when the paper was made.  I really don't want to cut it down, but in its original state it is rather big for the dolls house.  The image itself is about 3.6 by 2.8 cm.  With the paper edge it is 8.9 by 7.2 cm.   It is big, but think I will have to put a frame around the etching without cutting it down. 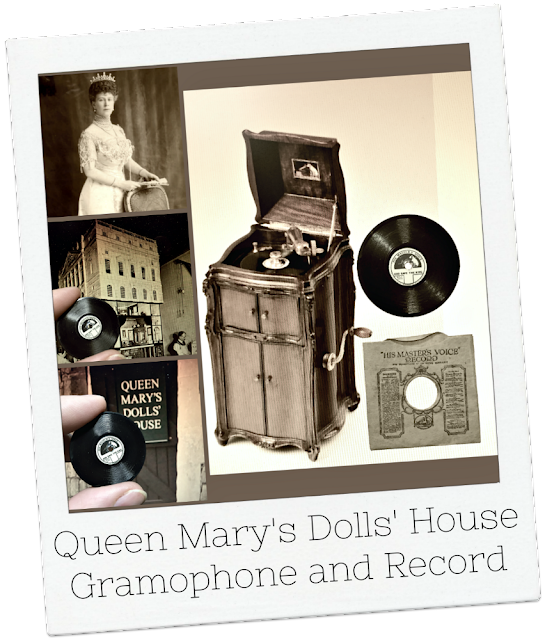 My third famous miniature is a His Master's Voice record which can also be found in Queen Mary's Dolls' House.  The record was one of a set of six, commissioned by the royal household and made by The Gramophone Company in 1924.

The tiny shellac record (it only measures 3.4 cm across) plays 'God save the King', sung by Peter Dawson (you can listen to a much longer version in the video below).  Queen Mary's Dolls' House has a fully functioning 10 cm high miniature replica of a HMV Grand Cabinet Gramophone to play the records on.

In 1924, when Queen Mary's Dolls' House was exhibited at the British Empire Exhibition in Wembley, HMV produced replicas of the miniature record "God save the King" to sell to the public.    According to the Guinness Book of Records, about 35,000 of these miniature records were pressed, so my copy is by no means unique! 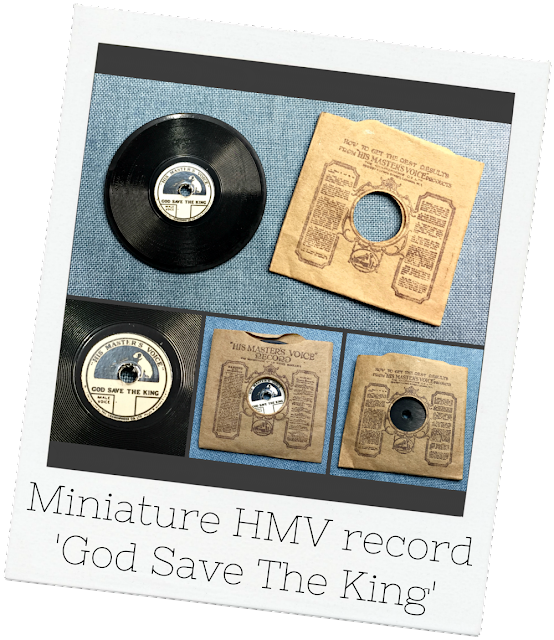 I found my miniature record in May 2011 at Chiswick Auctions in London, as part of a lot of around 20 glass topped boxes from the 1920's.  Apart from the miniature disc, the boxes contained several other miniatures.  Tiny knitted socks, blue glass blown vases and jars of marmelade and strawberry jam.  The jam jars can also be found in Queen Mary's Dolls' House.

Although I had just visited Windsor Castle and seen Queen Mary's Dolls' House the day before the auction, I had no idea the miniatures I had bought as a nice souvenir were copies of the ones in the Royal Collection.  A lucky find!