After more than 10 months working on Elly's estate miniatures, I am very happy to finally return to my own work and miniatures.  I took a holiday which included visiting the Kensington Dollshouse Festival in London.  Such a wonderful show!

Of course you can't visit the KDF without finding some treasure there... 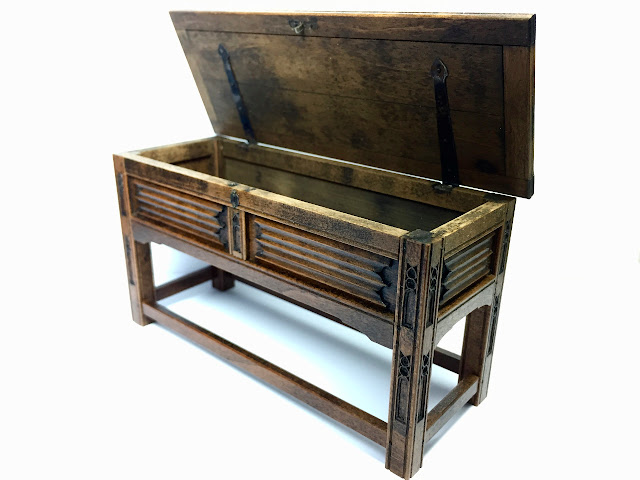 Both of my canal houses have mainly been decorated in 18th century styles and later.  However, I couldn't resist this great merchants or counter table from David Hurley.  It is a piece I could fit into one of my rooms somewhere, as a piece inherited by one of the inhabitants.  The piece has beautiful carving and, quite unusual, horizontal linenfold panels. 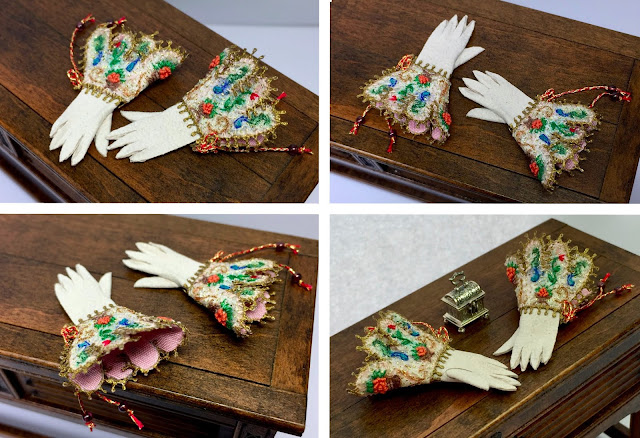 Next to David Hurley was Daniela Kiefhaber's table (Microdolls).  She had the most wonderful embroidered gloves and I just couldn't resist them.  These gloves were inspired by a pair depicted on the 17th century painting  'Portrait of a Woman aged 34 years' ( Louvre, Paris) by Dutch painter Pickenoy. 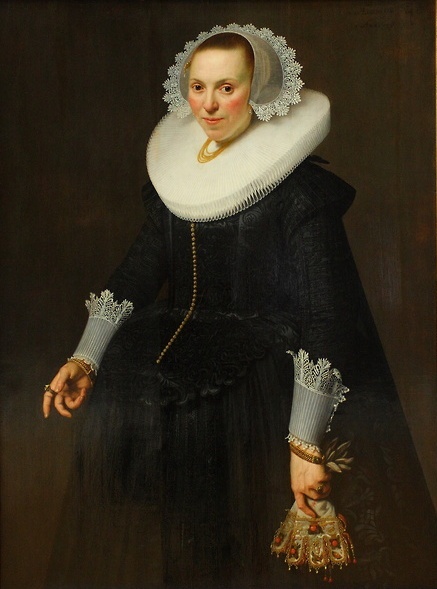 Pickenoy was a contemporary of Rembrandt and actually his neighbour in Amsterdam for a number of years.  Pickenoy painted several (wedding) portraits of women holding embroidered gloves.

In the 17th century Netherlands these richly decorated gloves were a symbol of wealth and status.  When a couple got engaged, it was customary for the man to present his fiancée with a pair of gloves. 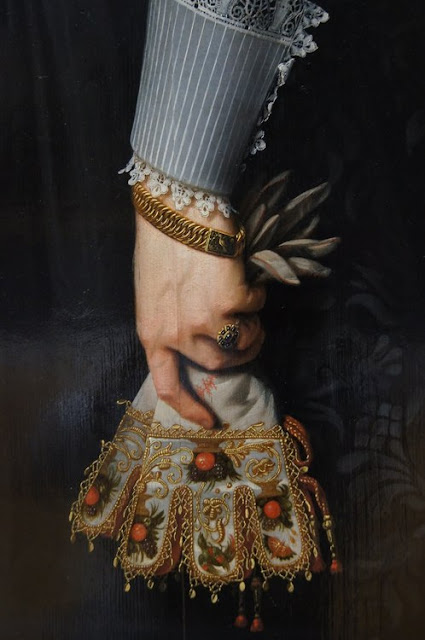 The designs of the embroidery all held symbolic meaning.  On the miniature gloves there are tulips, which, like the rose, represent love.  The marital state and fidelity is symbolised by the peacock, an attribute of Juno, the goddess of marriage.  The embroidered fruit bowls symbolise taste and the fruit, possibly pomegranates, symbolise fertility. 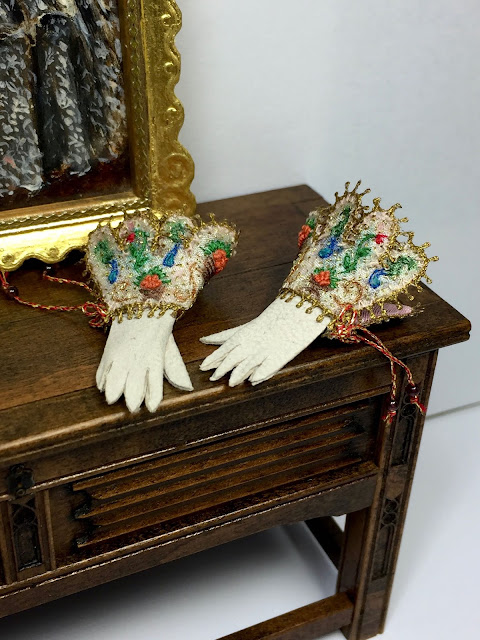 The miniature gloves are made of the thinnest leather and the silk cuffs are embroidered with silks and antique gold thread.  They are lined with pink silk.  The silk and gold thread bows are finished off with tiny agate beads. 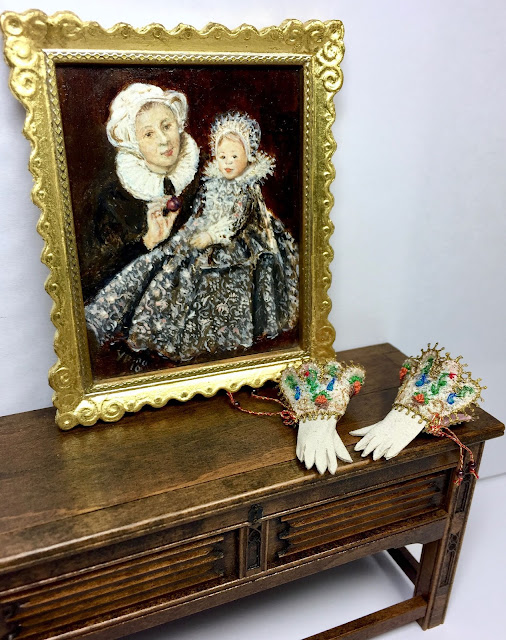 The painting is by Elly Ypma (I bought it several years ago), an impression after the original painting by Frans Hals, Catharina Hooft with her nurse, 1619-20.  There is a little bit of a connection:  in 1636 Pickenoy painted the wedding portrait of the by then 19 year old Catharina Hooft.  Unfortunately there are no wedding gloves in that painting. 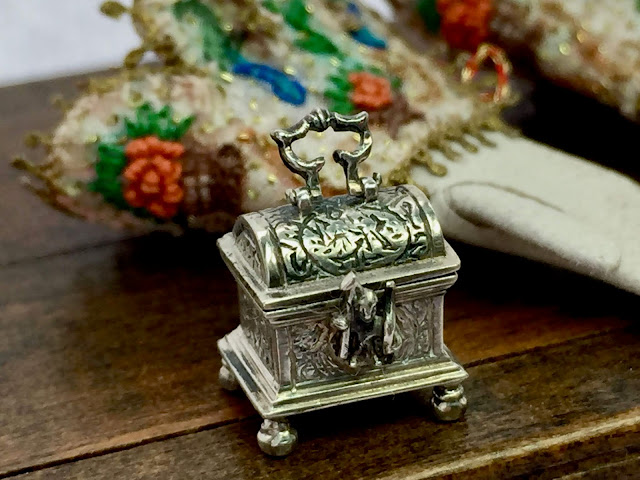 The little 17th century silver wedding casket (knottekistje) was made by Jens Torp.  It has been in my collection for a while now, but it fits in here as the casket, filled with coins, was presented by a (wealthy) suitor to the girl he wanted to marry.  If she accepted the casket with coins it meant they were engaged to be married. 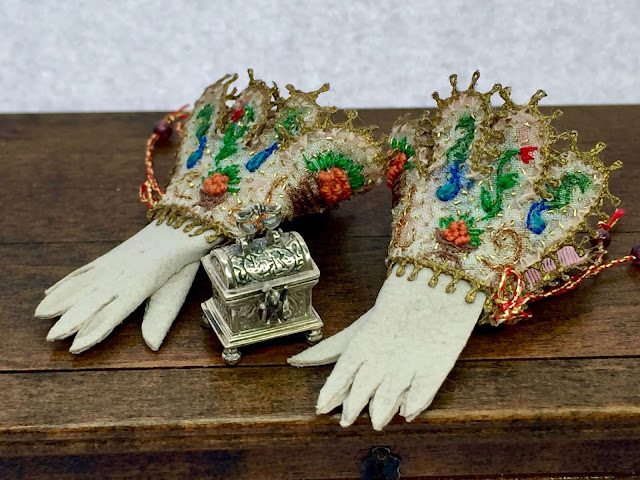