Carry on with the kitchen... 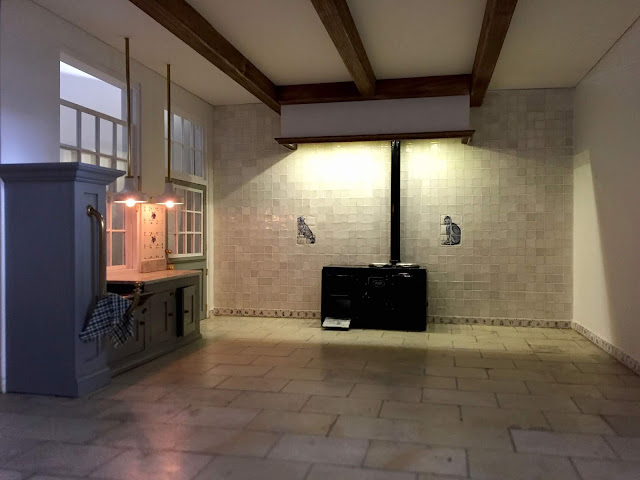 Thank you for all the lovely comments on my previous post on the kitchen.  I had a problem posting my replies, they all seem to have disappeared into thin air...

I continued working on the kitchen.  As I mentioned in my previous post, removing the side wall exposed the unfinished side of the water pump.   I had wanted to tile it with a lovely flower scene I had painted a few years ago, but it just didn't fit nicely on there so I decided against that idea.

The best option was to just take the top off and put a new one on there around the tree sides.  As always with these types of changes, I ran into all kinds of little things which needed adjusting because of the changes.  But one thing at a time and eventually it all fitted back together again.

I still didn't make a new handle for the pump.  As I mentioned six years ago as well ;-) this one is far too big. 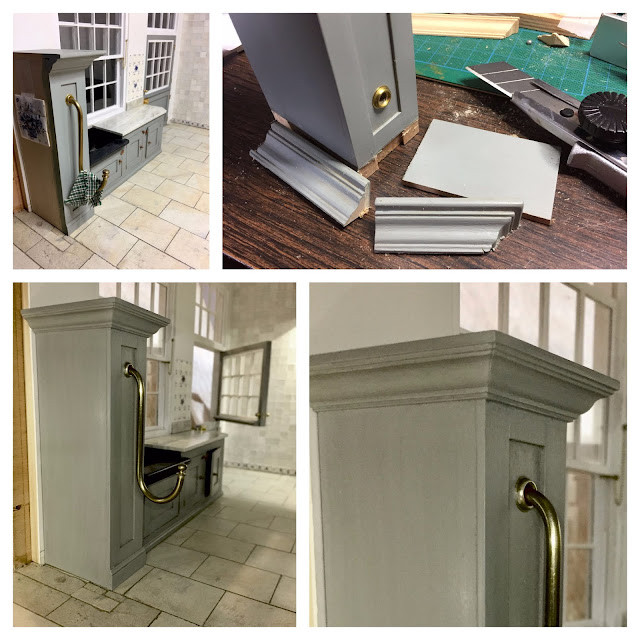 Next on the list was finishing the wall on the right side of the room.  I wanted a simple white plastered wall and continue the skirting board of Delft blue tiles.  The tiles then serve as a true mopboard, protecting the walls from splashing water when mopping the floor.

Unfortunately I lost all of my tile files during a computer crash a few years back, so I had to start all over again.  It was a lot of work to find all the right tiles, get them the right size, colour etc. to print them and use them like I did on the other wall.

On to the ceiling.  I found photos of a Herengracht basement kitchen on a real estate website.  The photos clearly showed where the ceiling beams were and how they were part of the structure of the building.  The 18th century dolls house belonging to Sara Rothé shows the same position of the beams in the kitchen.  A cross beam supports the fireplaces on the floors above.

In my kitchen the beams supporting the walls are all plastered over, the rest of the beams are visible. 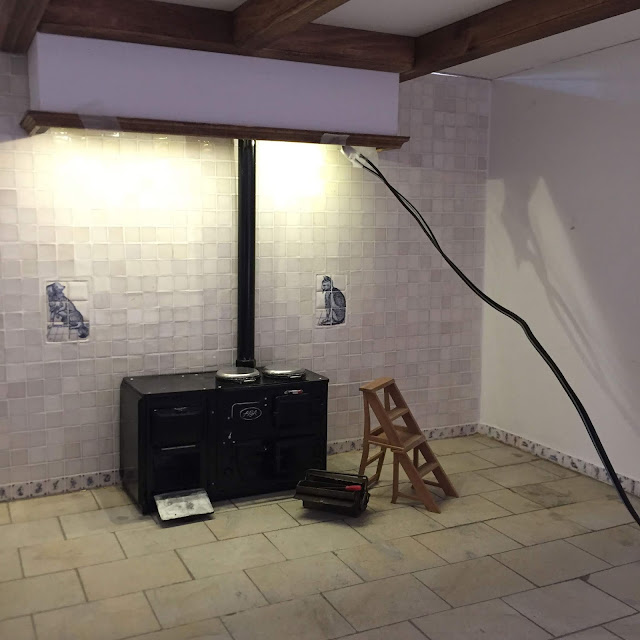 I made a wide chimney breast over the AGA cooker.  The chimney breast would have been much lower originally but I didn't want to cover up the tiles on the wall.  It was probably shortened during some renovation in the past ;-) 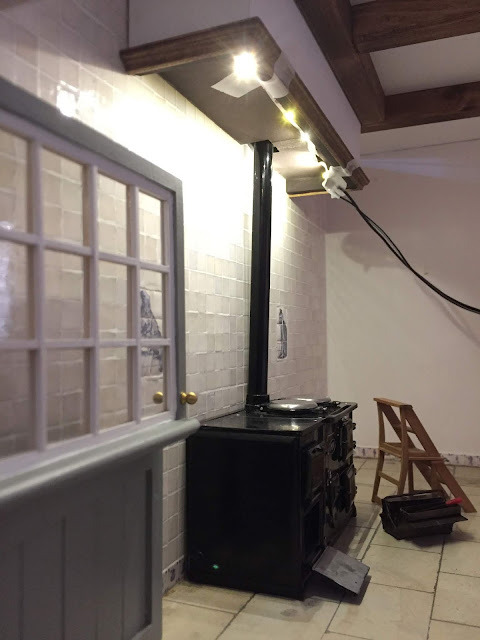 In a drawer I found a battery operated strip of LED's.  I have never used LED's before but I thought they would look nice inside the large chimney breast.  So I cut off a length and soldered them to the wires of a transformer.  These run on 4,5 Volts.

With normal light bulbs it doesn't matter, but with LED's it is important to connect the plus and minus correctly.  If the lights don't work when the power is on, the wires may be the wrong way round and you'll have to change them over. 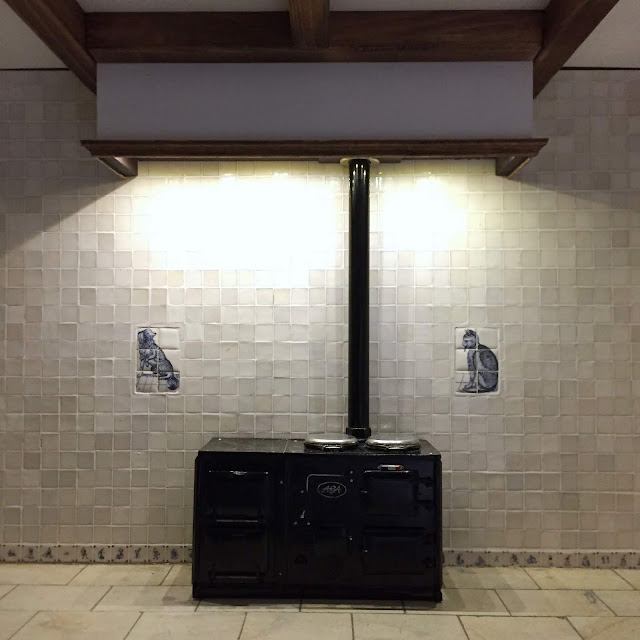 I really like the effect of the light coming from the chimney.  For the AGA flue pipe I made a simple round connector into the chimney.  Once the ceiling is permanently attached, the AGA will be kept in its place this way.

More lights were needed of course.  I had kept two applicator caps of hair colour bottles in my stash for years.  They have the perfect shape for pendant lights.

Making the lights was fairly easy to do:  I cut off the screw tips, primed them, sprayed them a marble colour, cut plastic inserts for them, glued on metal caps, cut brass tubing and threaded wired bulbs through them, glued it all together and finally installed them.  Installing them was the most difficult part! 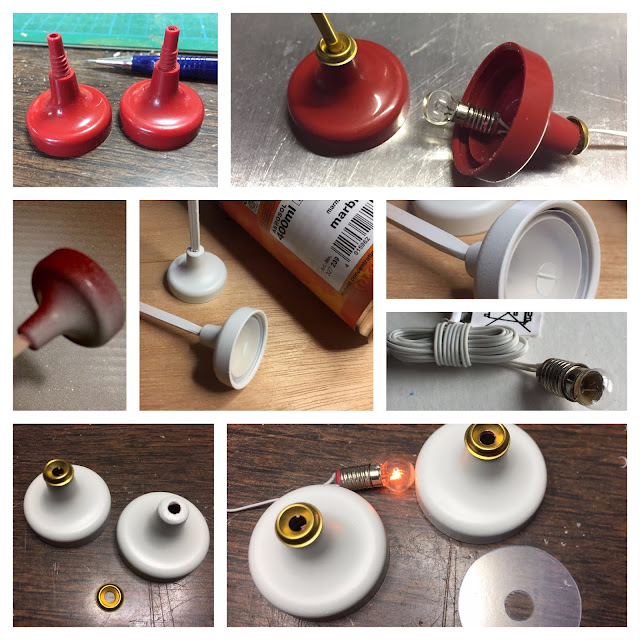 I must say I think they are a success, I really like them.  Such a pity they changed the bottle caps on the hair colour bottles! ;-) 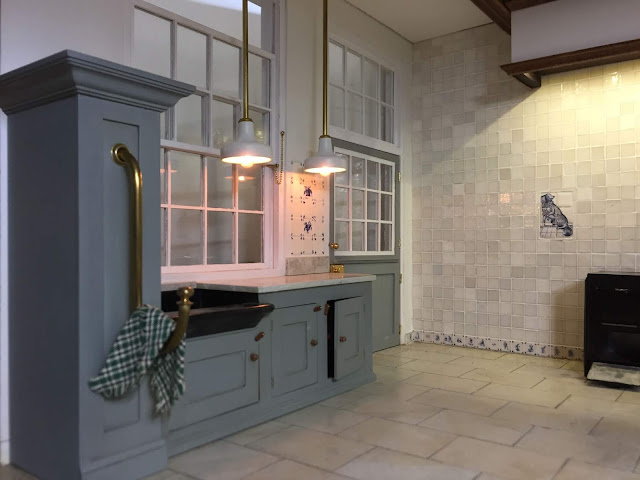 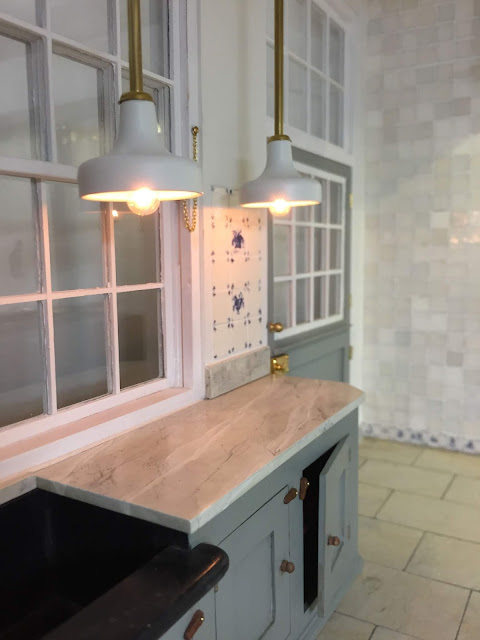 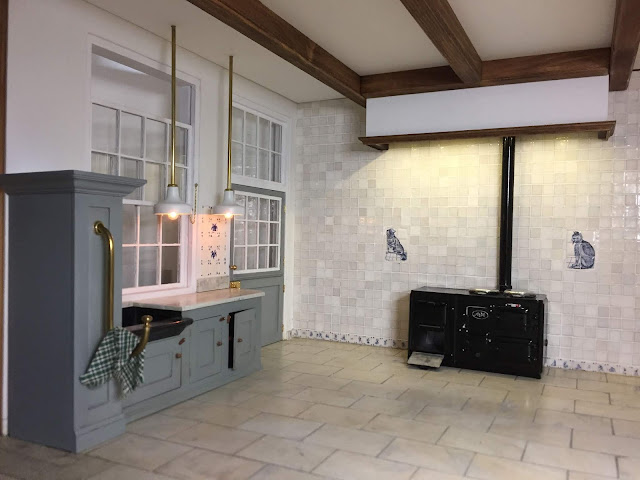 And finally, just for fun, another shot of the kitchen in progress.  A little further back.  A messy worker...who?  Nooooo, not I.... ;-) 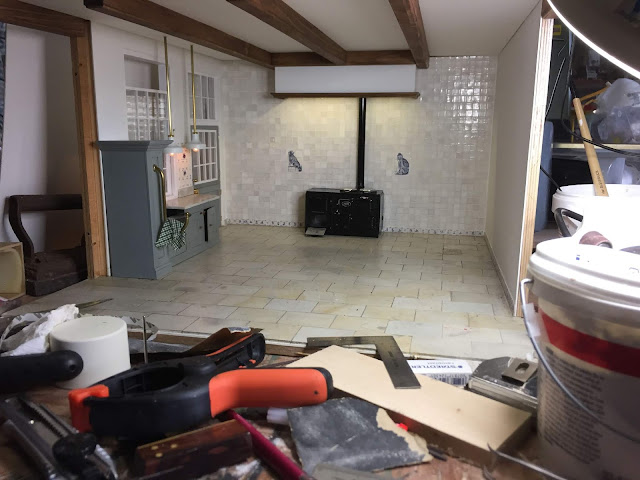